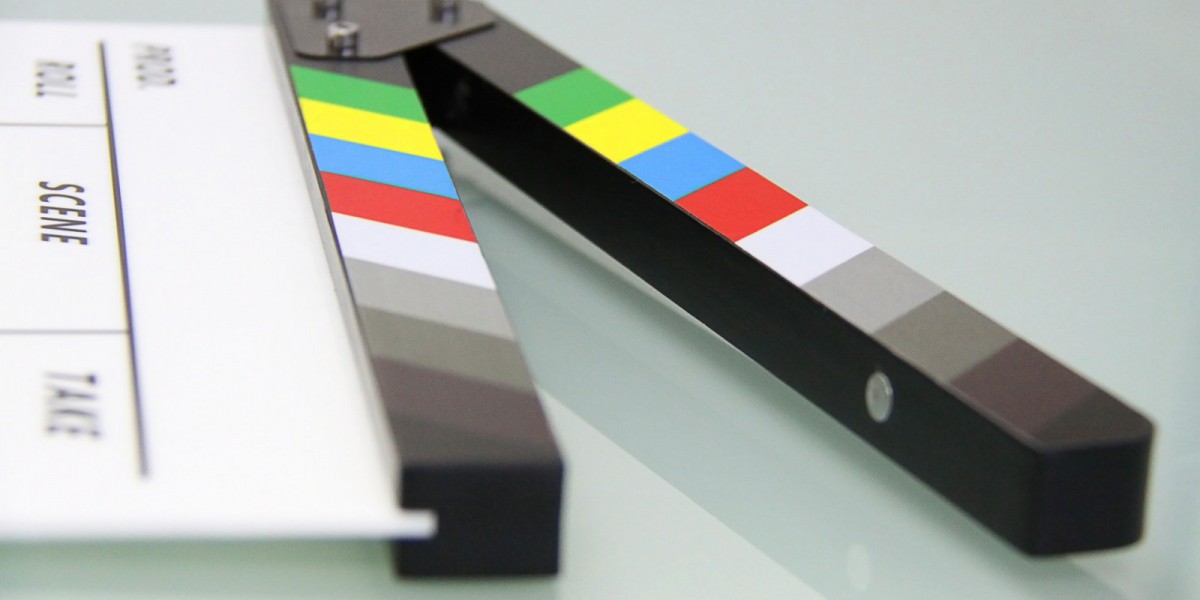 But there are valid use cases where certain configurations can and must be modified directly in production. Examples of immediate use are, for example, the creation of new Webform forms, or the creation or update of new Newsletters managed with the SimpleNews module. It is quite legitimate for a webmaster to modify or create new NewsLetters on the production site. It's almost like content, except that ... it's a configuration entity.

Let's discover how to manage these particular cases with the module Configuration split, module that will allow us to maintain an organized process to manage the evolution and maintenance of a site in production while allowing the modification of some configurations live.

We will illustrate the configuration to be put in place to allow users to create new Simplenews Newsletters on the production site.

After installing the Configuration split module, we create a new parameter for this module. We assume that the Drupal 8 project is based on composer and that its synchronization folder is located on the ../config/sync path relative to the project docroot.

First we create a new ../config/excluded directory. This directory will host the YML files of the configurations that have been created in production.

Then we define a new Configurations split parameter. 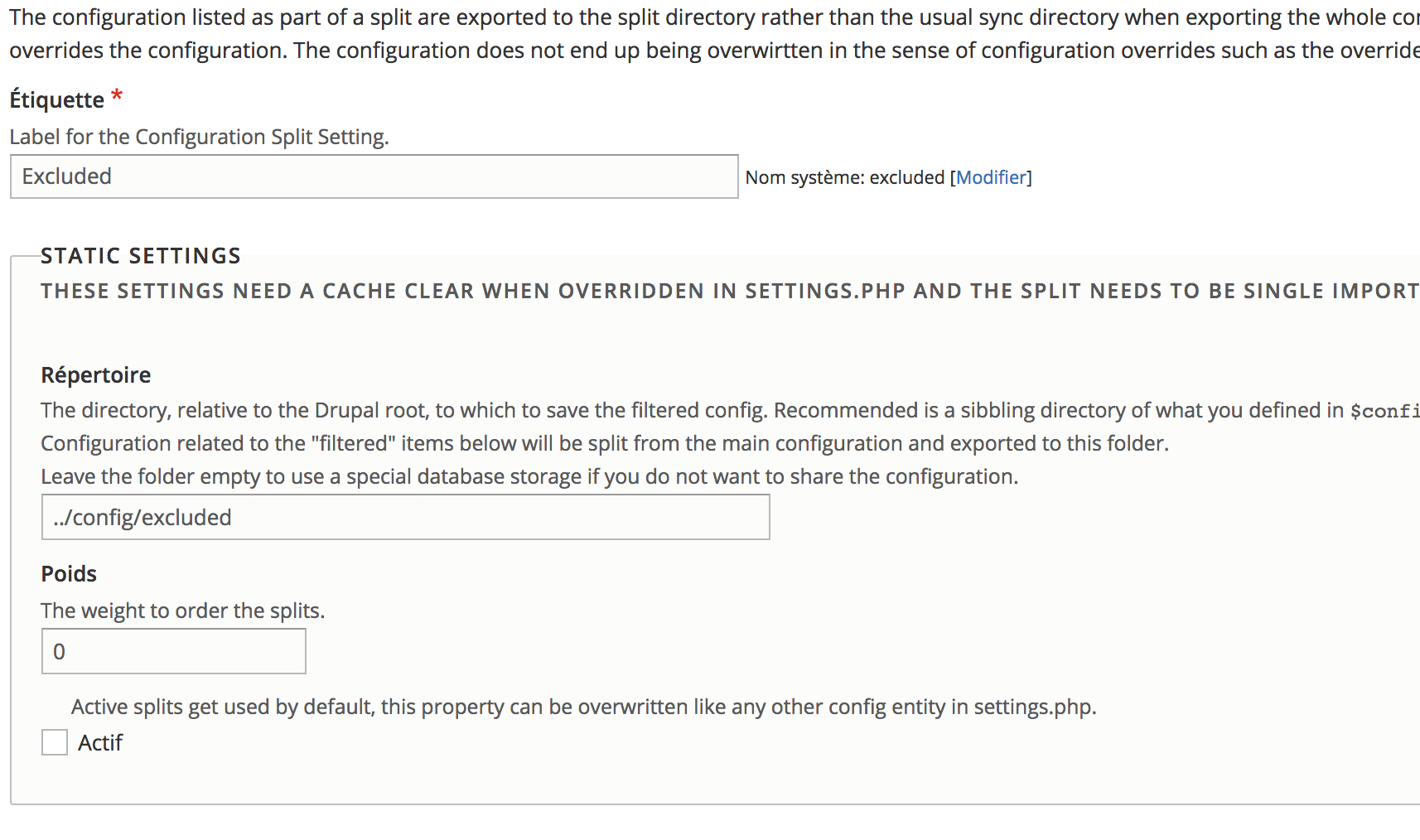 We give it a name, tell it the configuration files storage directory created previously (../config/excluded), then the most important thing: we do not enable this configuration by leaving the Active option unchecked.

We continue the configuration, using the Conditional Split section. 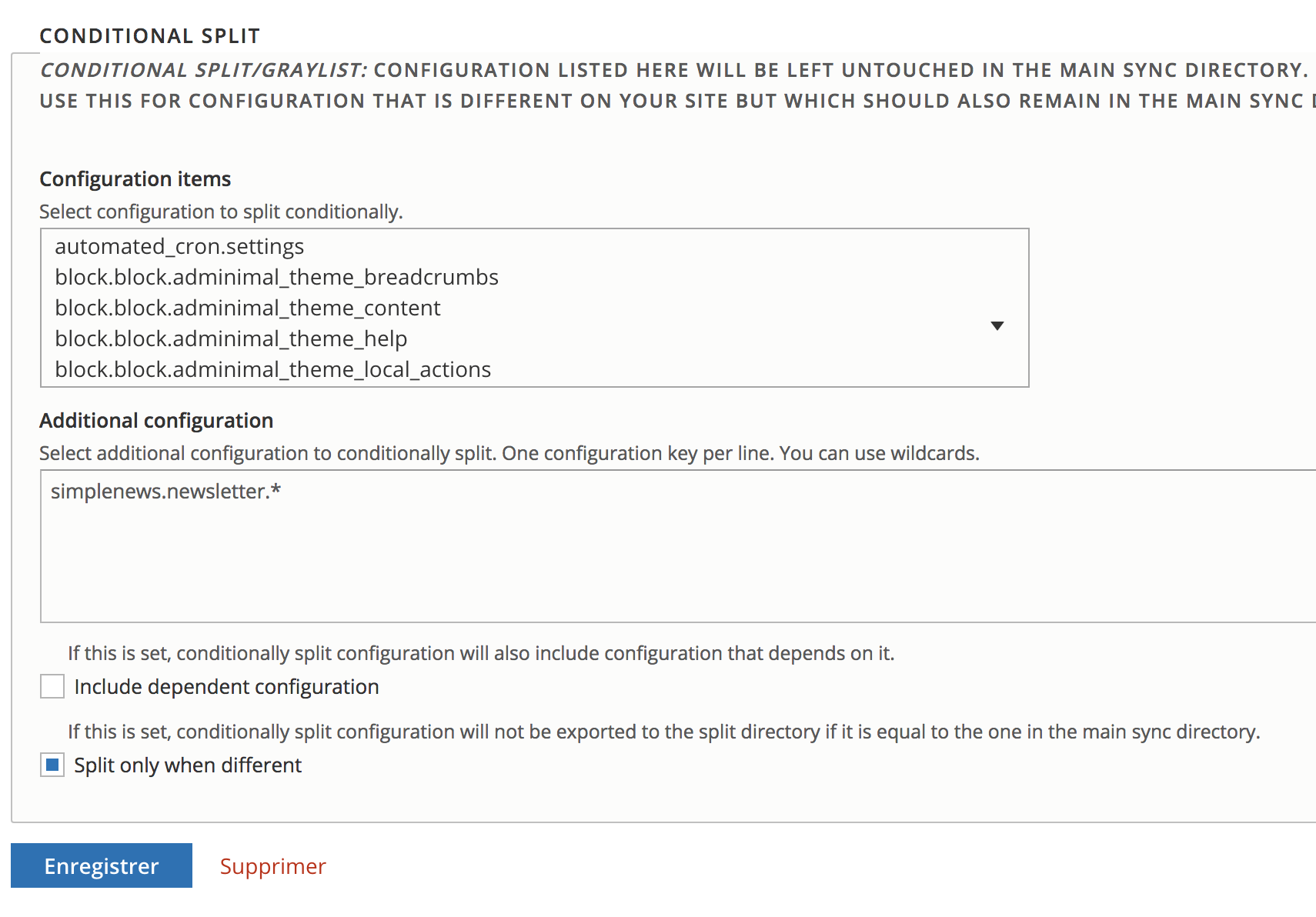 Here we can select an existing configuration, or specify configurations using wildcard. Here we indicate to cut the configurations of all Simplenews newsletters, by means of simplenews.newsletter.* files. And we enable the Split only when different option, which allows us to keep identical configurations between environments in the main synchronization directory containing all site configuration files.

Then we can record, to get.

Note again the Inactive status of our configuration. It must remain so on all source environments other than production.

New process for importing the configuration

Once this configuration is created, we export it, and then commit it on our depot and then deploy it on all our environments, including production. For example like this, but of course this is to adapt to your current process.

And we get on our production site our Excluded configuration which is now activated.

And it's over, or almost. From now, it will be necessary before all import of configuration on the site in production, to launch beforehand an export of the configuration excluded by means of the command drush config-split export (or drush csex).

This command will detect if new configurations are present on the production site, or if existing ones have been modified, compared to the general configuration of the site, and if necessary will export these modified or added configurations in the directory ../config/excluded.

Or using a small shell script

From now on, you will be able to create and manage our Newsletters as simply as it was content, directly on the production site. Of course the same concept can apply to any configuration that you want to be able to manage in production: Webform forms for example, or the positioning of some blocks, etc. while maintaining a structured process for maintaining your site in production using Drupal 8 Configuration Management.

Thanks to Jon Minder for his article Advanced Drupal 8 Configuration Management (CMI) Workflows that helped me more, and of course the creator and maintainer of this module particularly useful.

Hello, this post helped me better understand how to use config_split. Merci!

There are 2 excerpts where I had to refer to the French version to clearly understand what you meant:

2- «we will activate it from the settings.php file by adding a configuration overload», I think «override» (instead of overload) is the proper term to use in this context.

Thanks for the feedback…

Thanks for the feedback. Fixed.