Do I have to wait for Drupal 9 for my web project?

In a previous post, we saw the Drupal 8's new policies for versioning, support and maintenance for its minor and major versions. This policy has evolved somewhat since the last DrupalCon Baltimore conference in April 2017. And this evolution of Drupal's strategy deserves a little attention because it can bring new light to those who hesitate to migrate their site on Drupal 8. Or those who are wondering about the relevance of launching their web project on Drupal 8.

Since drupal 7 is maintained until the release of Drupal 9, the issue of waiting for Drupal 9 release can be legitimate, especially since the technological break between Drupal 7 and Drupal 8 has been consistent, we can say, with a re-writing from scratch of a very large part of its source code (~ 80%), but also at the same time a reduction of its technical debt.

And uncertainty hangs up to now on the height of the march that would be between Drupal 8 and Drupal 9. Let's face this uncertainty.

The publication of the Drupal 8 road map has apparently misled some readers somewhat stunned. Indeed, the schedule published on the cycle of releases on drupal.org can sometimes be misinterpreted. So much so that now the online version of this schedule has a watermark Example only.

And yet I could see these categorical assertions circulating:

And this with the support of a somewhat adapted scheme (no doubt that it was misunderstood), with the addition of the years on the abscissa axis.

To date nobody knows if the Drupal 8.4.x version will be the last minor version of Drupal 8, with the launch of Drupal 9 in 2018. In fact we are already talking about versions 8.5.x and 8.6.x currently and new additions in Drupal 8 core, whether it's the publishing process, content versioning, redesigned media management, JsonAPI integration, and so on.

And if anyone dares to say otherwise to this day, then he has a vision of the future out of the ordinary, and would do well to play the Lotto right away.

Will Drupal 9 be a technological break with Drupal 8?

Drupal 8 was a real technological breakthrough. And it is understandable that some reluctance is expressed if the effort required to migrate a Drupal 8 project on the future Drupal 9 version is as important as that between Drupal 7 and Drupal 8. Given this uncertainty, we can understand that many sites on Drupal 7 can wait for Drupal 9 version, in case...

Instead of two migrations, which are not trivial for complex sites (and still it depends on the project, some Drupal 7 sites can be migrated in a few days at most), I prefer to make only one.

This is logical and understandable.

But since DrupalCon Baltimore last April, Dries Buytaert has clarified this policy on the next major versions of Drupal (see Making Drupal upgrades easy forever) and lifted this uncertainty and fear. 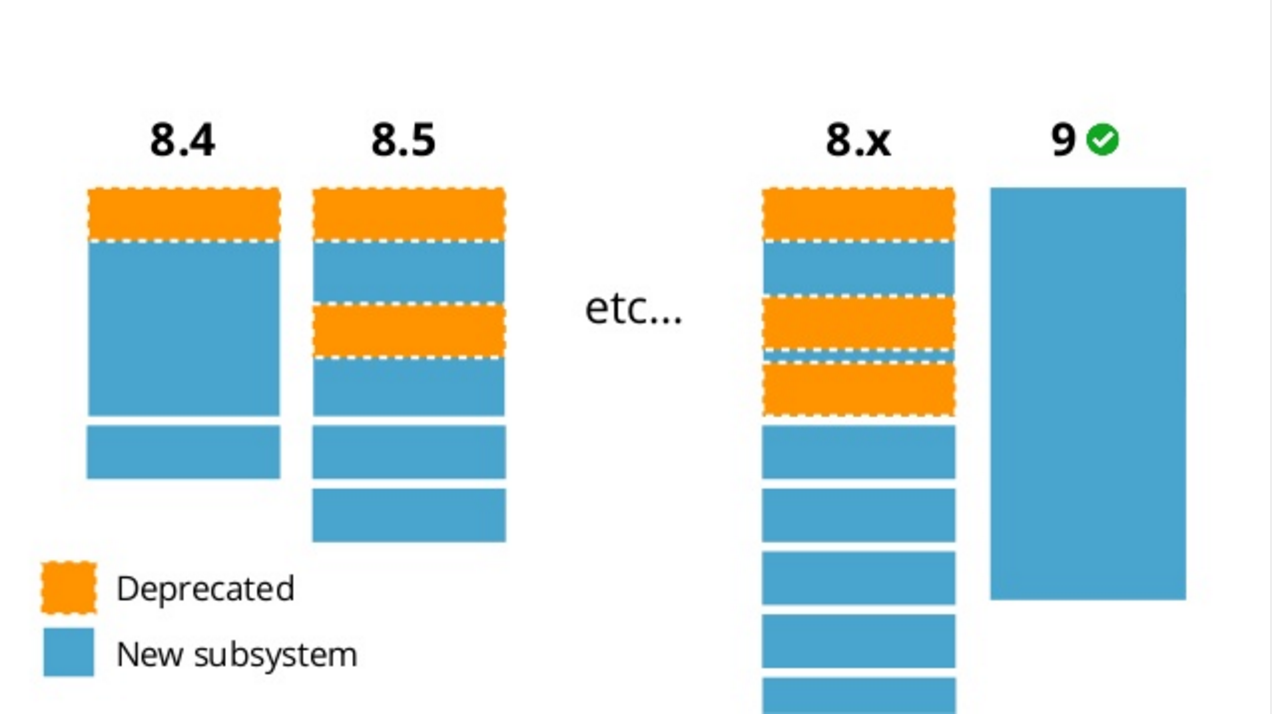 One could almost say that Drupal 9 will be the continuity of Drupal 8 with a consolidated API, refined, and purified but also with all the functional richness, at the click, introduced with all the additions that are released with the Drupal 8.x minor versions.

In fact, if we were to try to guess the date of the maintenance end of Drupal 8 today, we would just as well try to find a needle in a haystack. And even if it was found, the good deal! Drupal 9 would be an additional minor version, just a little more special. With all the ecosystem contributed modules preserved and compatible.

In other words, the compatibility of the modules is now guaranteed on the major ascending versions.

And this is very good news. No ?

It was me that changed the original diagram 1 from 8.4.x to 8.n.x as we were hearing just the queries you are discussing.
Which actual minor version is the “last” is not yet determined, only that there will eventually be one and the process you describe above happens.